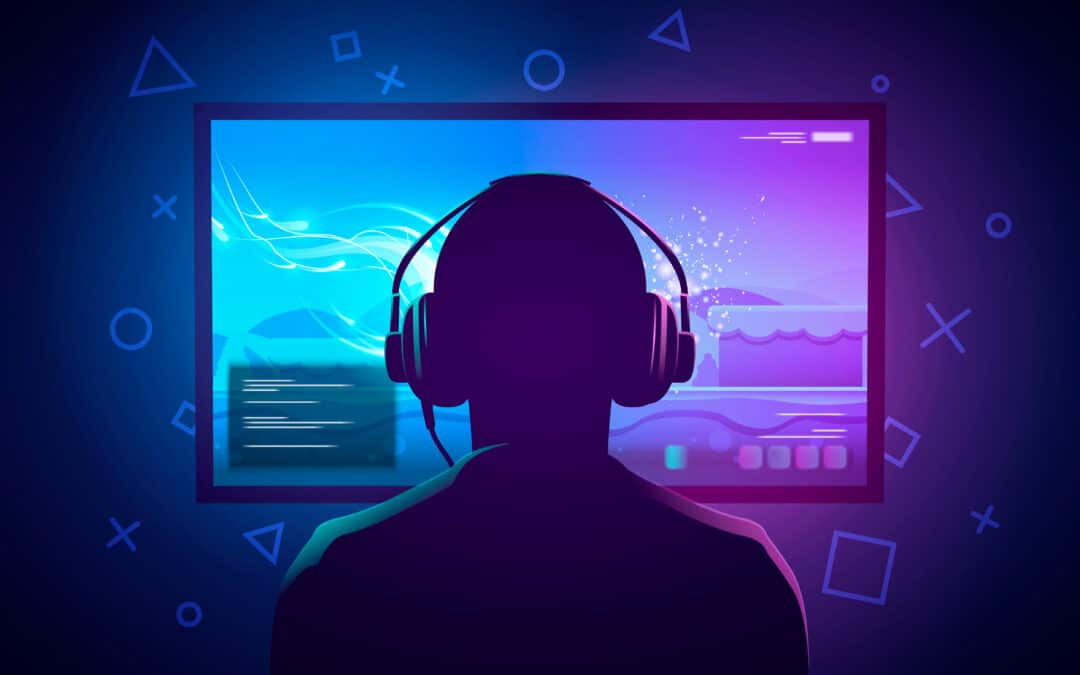 According to Newswhip, video game companies find success on social media because they:

This is what every company should strive to do when creating social media content. Regardless of your industry, completing these goals will continue to drive engagement in your social media.

Examples Of Social Media Content From The Video Game Industry

Our first example is from Nintendo’s game Animal Crossing: New Horizons. Animal Crossing is a life simulator game that has been around for years and has seen massive success with its latest entry. While they could have created a standard social media page, they instead made a very fun and creative change.

Instead of just having a Twitter account manned by an employee, they have the account run by the in-game character, Isabelle. In Animal Crossing, Isabelle is the secretary to the head honcho, Tom Nook. All the updates on the Twitter account come from Isabelle.

For example, in a recent tweet, Isabelle shared the following: 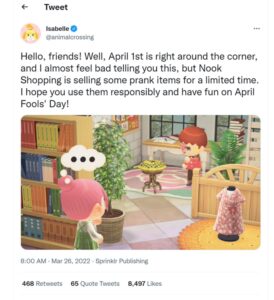 This April Fools reminder is a perfect example of how you can have fun with your social media content. This post gets a message across to your audience and drives them to buy your product.

Stardew Valley is a hit indie simulator game about a farm, with a few RPG (Roll Playing Game) elements in for longevity and fun. This Twitter account is run by the person who made the game, Eric Barone AKA Concerned Ape. This allows people to interact directly with the developer, and thus helps build a fanbase.

Eric’s Twitter account teases new updates coming to the game, celebrates holidays and even retweets some fan artwork. This not only helps his brand image but shows that you can use social media content to connect with your audience in new ways.

This account also handles customer service, which has become an integral part of social media content. When people have direct access to a developer’s social media account, they are going to ask questions about issues they are having with the game. Responding to them in a timely manner will not only help improve your standing with your audience but will also show your expertise in both social media content and your industry.

How do you cultivate engagement with your audience? One way is to ask them to participate in a bit of trivia. Recently Ubisoft asked their audience to guess a game with a simple tweet playing a few seconds of a song: 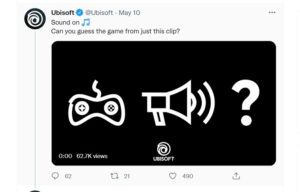 They followed with a few more seconds of the song: 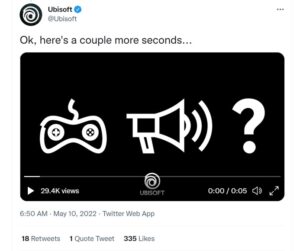 And finally revealed the answer: 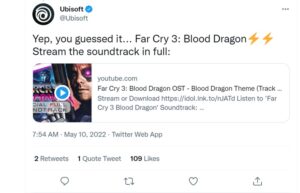 This tweet drives engagement on the social media platform and sends people to another source of social media content for the brand, specifically their YouTube channel.

Rockstar is one of the most well-known video game companies. They have created some of the most popular video games series like Grand Theft Auto (GTA), Red Dead Redemption and Bully. All of these games are critically acclaimed and have amassed a huge fan base. Rockstar can be run of the mill when it comes to social media content, however, every now and then, they create something special. 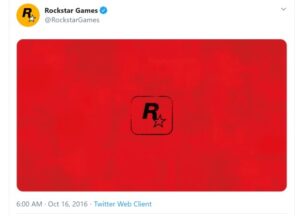 To non-gamers, this image might not mean anything, as it just looks like the Rockstar logo with a red background. However, to gamers it was finally a sign that a new Red Dead Redemption game was coming. Red Dead Redemption is a western game, and a sequel was much anticipated for years. This tweet was tremendously successful and shows the power of social media content. Rockstar didn’t even tweet out any information with this photo, but the internet ran wild with what it might mean. Countless articles and theories came out of this tweet, and then Rockstar tweeted: 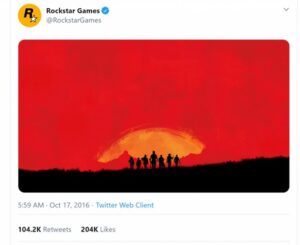 This made their fanbase essentially lose their minds with excitement. Rockstar capped this off with the following tweet: 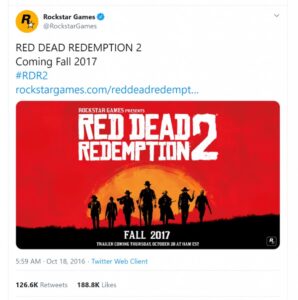 This is a textbook example of viral marketing. While it is hard to achieve viral marketing consistently, it can be tremendous for your brand if you can pull it off. Giving your audience little bits of information at a time keeps them engaged and encourages them to check back for new social media content often, driving engagement and cultivating excitement about a product or content.

Usually, video games companies do a great job with social media content, but sometimes they fall well short of the mark. An example of this is from the team behind the Overwatch social media. Overwatch is a team-based 6v6 game. It’s immensely popular, in large part due to the competitive scene. In Overwatch you play as 1 of 32 characters, each of which have different abilities and skills. Every now and then, Overwatch will tease a new character release. In late 2016, Overwatch was rolling out a new character named Sombra, a hacking type character. With this the overwatch team came up with a ARG.

An ARG is an alternate reality game, which just means there are some aspects of the game that show up in the game, and some in real life, like in their social media content, websites and videos. Sometimes this can drive engagement and be fun for your audience, but sometimes it will fall flat.

This segment from an article from Forbes sums up the issues well. “It’s no wonder that fans that have devoted a lot of time to this search are upset. If the result is this webpage, and the end result of the web page is the release of Sombra, this yawning two-month gap was a poorly planned, poorly implemented part of the ARG. As soon as fans solved the “final” Sombra puzzle, she should have been ready to go. This ARG should not have been started if Blizzard was not ready to start talking about her, or able to release her. Instead, now we’re in this awkward position of what was a pretty fun activity that has turned into something stale and lame.”

It’s a great idea to think outside the box, but don’t make it a laborious effort for your audience or leave them hanging for more information.

Bonus: Use Video Games To Take Your Social Media Content To The Next Level 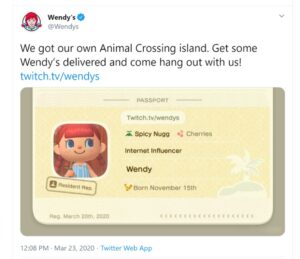 While this article is about how you can learn from how video game companies use social media, you can also learn how to use video games to supplement your social media content!

For example, Wendy’s, a social media account that consistently performs well, used the release of Animal Crossing to connect to a new audience. Wendy’s created an in-game outfit for Animal Crossing: New Horizons which made your player character look like the Wendy’s Mascot. They also created an island any player can visit and they even host livestream events.

It easy to discount video games, but their social media content is the gold standard for engaging with your audience, promoting a product, building your brand and more.

Do you still have questions about social media content marketing? Contact us today for a complimentary consultation with our CEO, Erika Taylor Montgomery. She would be happy to share other content marketing and public relations strategies that can be beneficial for your business!

Sign up for a complimentary consultation during December and receive an Annual Marketing Planning Guide valued at $475!  We offer a 30-minute phone consultation with our CEO, and can answer your questions and discuss your specific marketing needs - no strings attached. Call 408-218-2391 or contact us today to arrange your consultation!